Long ago… (2016 ? )… I was just learning a musical instrument, a flute; handy and light to the touch.  I searched out other FOM Music Society groups; though not to any genuine result as a long view, what I really sought was rock.

In the habit of previewing notions with the Executive Director; then as now, to Janet Pryer, I said something like; “You know Janet, do you suppose maybe FOM could have a rock band?” She had asked for ideas after all.  If anywhere, I felt a hidden ability might be awakened there. …uhmm is that a low groan I could hear from our Exec Direc?

But the roadblocks; you know, a what do you call it, inertial barriers?… the ‘how to’, ‘when to’, ‘where to’.  I was at a crossroad; talking to myself, frustrated even.

“Dog gonnit”, I said to my flute, “I’ve had it with this confounded playing, give me Rock N’Roll or give me death!!!  “Oh well, maybe not death so much as just a year or two away from it all.

Then all of a sudden, Salvation!… an FOM newsletter …a new program this fall! (This fall then was fall 2018) . A rock band, as yet unnamed, open to all irrespective of musical ability. “I can answer to that”, I said to my flute.  She readily agreed; a little too quickly, as I remember. Somehow the critical mass had been attained; Rock ‘N Roll beginning fall 2018!  Ahaa!

Well done Janet!  I am on my way.  But me and my transverse flute?  Probably not. Clunk! I fell from the stellar height of the topmost clef. Well, what do you suppose is down at the bottom?  I’ll tell you, bass, yeah bass guitar!

For me a rock band is THE musical crossroad. Three years in, and the flute and I weren’t getting on so well (“grrrr… this fluting makes me cross”, I said to my flute, standing on her head at the furthest reaches of my room).

So now I had use of an electric bass. Thank you FOM! And Janet who at early rehearsals called to us from the exec direc doorway; “that sounded ‘so good’!” The exec direc, when we did perform was there; inside, outside, under rain, in shine and now masked and double arm lengths or more apart. There are others who came on board doing yeoman work with us; shuttling equipment especially. 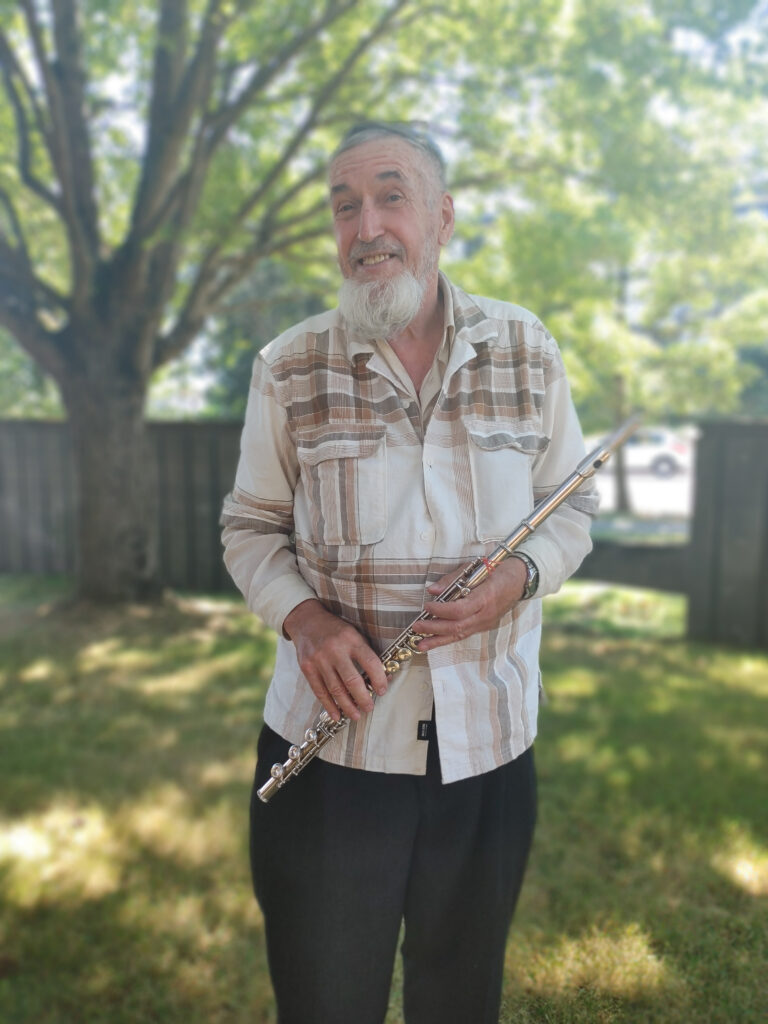 Oh, I still play now and then with flute, along with radio and online with quartets, with combos or even on our own.

My experience with the fabulous Recovery Rock Band has been graciously met from flute. No backward grimaces, no slighting comments. I must admit she has squeaked awfully, many a time. But not from any lingering animosity, it’s just we’re a bit rusty. And well, I’ve fallen in love with a bass guitar and can’t spend the time with the old dear that she deserves.

The upshot of it all? …if the grass looks greener take a chance and climb the fence!

Just as an afterthought, I have a concert type instrument that I could possibly sell to the right person interested in taking up a woodwind in the near term!

*This story was originally published in the